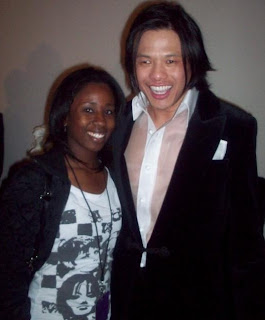 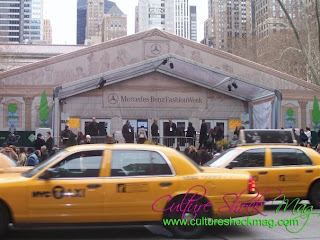 My name is Lakeithea Anderson and I am a local fashion blogger in Tennessee. Back in  February 2008 I got the chance to attend New York Fashion Week as press for Culture Shock Magazine. When I got the email that we were accepted to come and cover the events, I was in shock! It is every girls dream to walk Bryant Park during New York Fashion Week. When I arrived to New York City, which was my first time ever going to New York, I was so happy to be there. Knowing that I was just a few hours away from attending my very first two fashion shows, which were Ports 1961 and Icodice. As I arrived off the plane I was excited but that excitement died quickly once I learned that our driver had forgotten my cousin Kristain Miller (who at the time was a promoter for Culture Shock Magazine) and I, so we were stuck at the airport….

The next morning I awaken with better thoughts and finally made it up to Bryant Park to get
my press passes. Kristain Miller and I were getting the run around while looking for the place to sign in. Amazingly we finally made it to the destination and despite all the beginning trouble, once inside Bryant Park, I knew I was where I belonged. I can still to this day remember every company inside Bryant Park and where each was located. I quickly made my way around everywhere to meet and greet and also do some networking. After leaving from the inside of Bryant Park all I wanted to do was WORK I didn’t want to party or shop, all that was on my mind was emailing and doing phone calls so that I can experience every different area of New York Fashion Week.

My favorite thing about it all was the Fashion Shows. I just could not believe I was there to see all the creativity and inspiration up close and personal. My favorite was Zang Toi and I can recall coming out of the Fashion Show with Culture Editor-In-Chief Tatiana Johnson and seeing PETA there and despite the protest going on I was excited and I knew I made it (great way to an amazing ending). My favorite event was the Ebay closing party.

Being in Tennessee is so different from being in New York but I like to keep the mindset I had in New York. Each day in New York I knew I had to put my A game on and play the part. Now in Tennessee I wake up and no matter if I am going to my college campus to do some work or sitting in my bedroom to work on my own fashion blog, I get prayed up, dressed up, and imagine myself going to work for some big fashion empire and working for clients that I love. It has really helped because I get a lot of work done and my best work done. I continue to make a lot of great connections with different pr firms, designers, and more. I believe in dreaming big and New York Fashion Week has inspired me to dream even bigger!